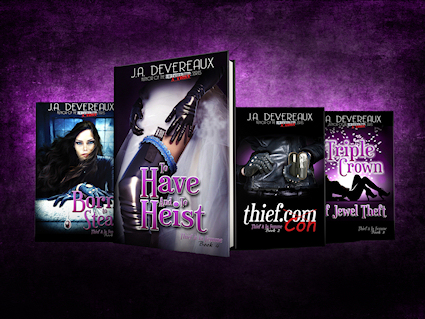 The complete Thief à la Femme series is available for purchase at www.Amazon.com.

What the author wants readers to know about this series.

I never thought I would write another series. Never needed to, never wanted to. I was all about the hot male thief working for the spies (the Requisition For: A Thief series – "REQThief"). The Thief à la Femme series came about because of The Heist videos I put on YouTube as marketing trailers for the "REQThief" books, but they ended up appealing to a different crowd, a different type of reader. One of my Heist video fans actually asked me to write a book about a female thief. I think I surprised even myself when I started thinking about it.

Because I cannot condone or write about gun-toting robbers, shooting or threatening to, and ripping off innocent people for their own gain, my thieves, both in the "REQThief" and Thief à la Femme ("Femme") series, had to have a saving factor about them. First, my thieves don’t carry guns. Second, they are basically good people who possess the incredible training – literally trained from childhood – to be the best thieves in the world. Third, for Gregg Hadyn, my REQThief hero, it was all about getting him on the right side of the law.

But I didn't want to do anything similar to that for the third point with "Femme." If I were to start a new series, it had to be totally different than what I had done with "REQThief." So when I began to seriously contemplate maybe starting another series, or at least writing one other book outside the "REQThief" series, I had to come up with another way to make my thief a good person, but without putting her on the right side of the law this time. Been there, done that. She had to remain a thief.

So Thief à la Femme incorporates a totally different scenario. Rayla Rousseau, my heroine in the "Femme" series, in so many ways, has always been a good person, and that’s paramount to the Thief à la Femme mantra: Beautiful. Intelligent. Consummate Professional. She's a thief… with a heart for justice.

Writing about the thief who isn't really a bad guy.

Both complete series are
available for purchase at:

"I would love to hear from you!"

J. A. Devereaux would like to give special recognition to the following:

© 2018 J. A. Devereaux. All Rights Reserved
Designed by: Hawthorne Software